You know people know you’re a geek when they start giving you mugs like this. 🙂
photo: Corrina Lawson

Happy Tuesday all! Today’s tea? Assam Loose Leaf because I seriously needed the caffeine boost to wake up.

The work on the steampunk, tentatively called The Dark Mage of Lotus Hall, continues at a good clip. Last night, I hit 35,000 words. I had to backtrack a bit, however, as I encountered what writers call “the saggy middle.”

In other words, things were going far too well for my intrepid heroine and it was time to pull the rug out under her feet by asking “what’s a horrible thing that can happen that will upend the entire cast?” and then doing that. I also wrote a scene between the antagonist and my heroine that it contained many-layered dialogue, my favorite thing ever. Hopefully, all those layers will be fully seen once the villain’s scheme is clear.

What those poor dears must endure for the sake of story. Mwwhahahahah! 🙂 (I’ve not put a foot in George R.R. Martin territory yet but I begin to see how his landscape develops.)

We’ve had several snow days here in New England, leading to a four-day weekend for the teens and less writing time for me. But, still, I managed to bang out a few fun articles. 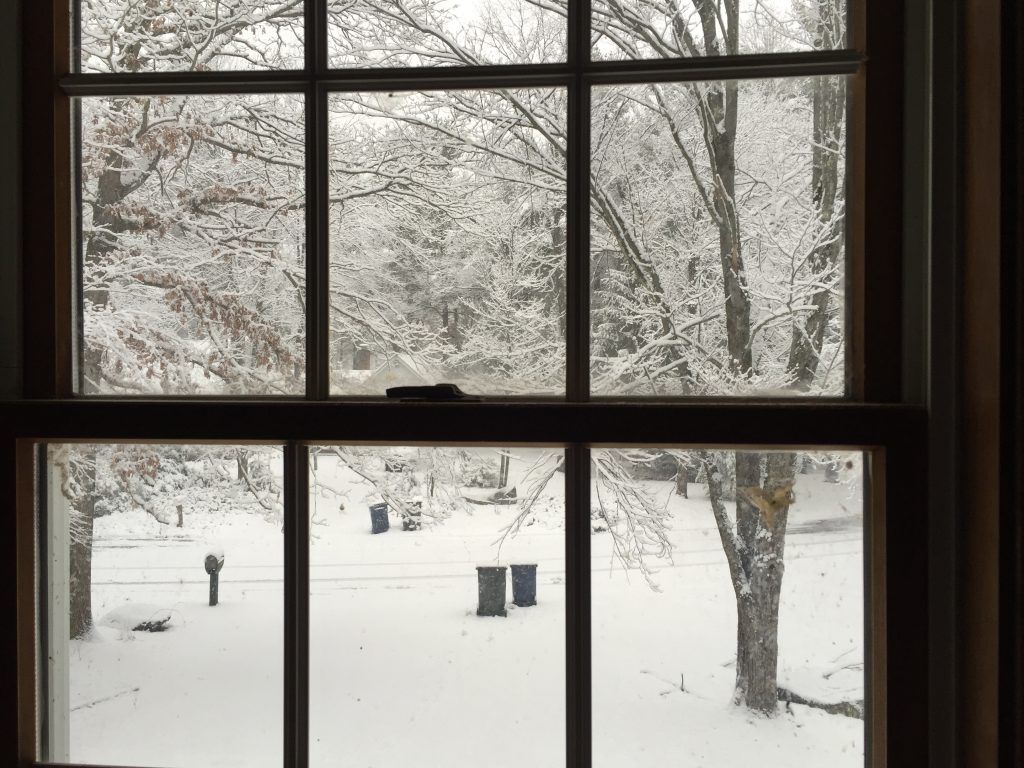 Out my office window this week. photo by Corrina Lawson.

My first post on Heroes & Heartbreakers which concerns, naturally, Wonder Woman, was published this week. Or, rather, it’s about her longtime love interest, Steve Trevor. Fate has not always been kind to Steve but now he’s Chris Pine, so it should work out all right in the end.

I’m still loving, loving Agent Carter. This week, it even did flashbacks well!

I enjoyed several of this week’s DC Comics, so check out the full reviews of DC’s entire slate and ended up riffing about my most hated trope: the all reaching conspiracy.

“Yeah, we’re supposed to believe Mother is this all-powerful person who can predict what children will be suitable and what won’t be suitable but, c’mon. I’d believe in superspeed more than seeing into the future to predict that this child will turn out to be exactly what someone wants. I’ll give Mother the ability to send women out as trophy wives for the rich. But to know which kid will be a superhero? Just no.”